Two Germans and a Swede

Sorry to disappoint, but this may not be what you think it is. Of course it is about three sleek, sexy things, but not of the animal world. I’ve been recently looking new car possibilities and have come down to three vehicles: a BMW, an Audi, and a Saab. That’s a strange combination, but I found a lot of interesting resources on the internet where I got great information and I test drove a lot of cars and in the end have arrived at a decision that most people find surprising.

Part of deciding about a car is looking at what you’ve owned in the past. I’ve always been a German car guy. I’ve owned a BMW 2002 and several different VWs. Most recently I’ve been driving a VW GTI VR6, the original pocket rocket and a fantastic pure drivers car. I definitely like the “German experience” and prefer a tight ride that is both sporty and comfortable.

Although I really love my GTI and I’ve had a lot of good luck with it (no mechanical problems), I think its time for a new car. I developed a list of must have features:

Anything cool on top of these things is icing on the cake really. When you put all these together you fall into the “entry level luxury sedan” category or perhaps a “truck” or small SUV. This is a pretty crowded space with probably 10 brands to go thru. I’ve got some specific, perhaps weird, tastes so I could knock out a bunch of brands that I just didn’t want: Honda, Infiniti, and Nissan were out right away. There’s something about them I just don’t like.

So this left only Acura, perhaps an American brand, and a slew of European makers. My next step was to take to the Internet in search of the “latest and greatest”. Here’s a list of some of the cool sites I found most helpful:

By far the most useful of these sites is Edmunds. I’ll never look for a car again without using this site as a primary resource. Everything you need is there from statistics, comparisons, reviews, customer opinions, and pricing. I would get all your basic information from Edmunds. The other sites I listed carry news, updates, and stories on cars.

I started my car search in September. This is a great time to start looking seriously for a car because end-of-year deals are just getting serious so you can really save some bucks. It is also when real information on the next year’s models is starting to emerge so you can find out if the model you are interested in will have big changes and perhaps hold off until they arrive in a few months.

Based on my criteria above I narrowed my search down to: BWM, Acura, Ford, Cadilliac, Mercedes-Benz, Saab, and Audi. There are a few more dealers within my distance criteria, but they clearly were not things I was interested in – for example Chevy and Suzuki have nothing that appeals to me and meets my criteria. Based on information from Edmuds I worked down to the following models:

Ok – I got a couple of freaky anomalies right. Yeah well…as I said I’m a little odd (just look at my blog’s title). I owned a pickup truck for awhile so a bigger vehicle isn’t out of the question and these are nice “sport-ish SUVs”. In the end I decided against these and they dropped out.

After poking thru all the sites and reading up as much as possible I started going to dealers. The big surprise for me was the difference between dealers. As I already said I’m a big VW fan so Audi had a leg up. I made an appointment to drive a car and when I showed up they had “forgotten” and did not have a car to drive. Can you believe that? Sheesh – no thanks. I sat in a bunch of the Audi cars and really they were so similar to a VW I just decided I didn’t want one.

Other dealers didn’t seem to really care if you bought a car or not. I called around for the types of cars I was interested in and some dealers just said they didn’t have one and I should call back later. That’s a strange way to move product.

After hitting all the dealers there were three clear leaders:

The interesting thing here is that I would not really have considered a Saab or a Merc if I had not done research, gotten curious, and actually gone in and test driven the cars. My point is – always go do the research and and test drive all the cars.

Test driving cars takes time. In my case I wanted a manual transmission and this really takes time. Apparently I’m a dinosaur or something because most dealers do not stock sticks anymore. I called just about every dealer in my area and could not get a BMW with a stick. Same with the Merc. Eventually I did get a BMW 328i with a stick and the Saab as well. Never saw a c300 with a stick.

I test drove the Merc and although it was a very nice car it was a bit soft in the curves. The Merc did impress me more than I thought it would – the engine sounds were great and it is very comfortable to sit in. I hated the dials and the kind of disco-ish needles – I can’t imagine watching those things for a bunch of years. That was a killer for me. Its possible I was also just biased against the “Mercedes” image in my head of old German grandpas driving them and smoking cigars…kind of like Laurence Olivier in the Marathon Man.

The BMW was nice, but I thought it was lacking in power. I also think its a bit too “fancy” for me with all the wood trim and stuff. I do really like BMW, but I thought the 328i was also a bit cramped all around, particularly on the passenger side where the dashboard invades the passenger space. The shifting was smooth and the “feel” of the car is quite nice. I also don’t really like their nav system and they really nickel and dime you on all the features and stuff.

I looked at an Acura TL Type-S. This is a very nice car and is the 9-3’s big competition. It is similar in size, power, handling, and features. The Type-S surpasses the Saab in technology/price. The Aero in my opinion is more fun to drive and I prefer the Saab styling inside and out. There’s just too much going on inside the Type-S and its hard not to think of it as a $$$ Accord. The shitfing in the Type-S is really nice and tight like my current GTI. I would definitely encourage you to look at the TL Type-S. For me it really helped me decide on the Saab.

The car that really impressed me is the Saab. I wasn’t really expecting too much and I kind of went into the dealer thinking “oh geez its a chevy”. Well I came out thinking something very different. For one thing the dealership was very friendly and easy to work with. I went for a test drive and took out first a 2007 9-3 base model stick, then a 2007 9-3 Aero auto, and then a month or so later a 2008 9-3 Aero auto with paddle shifters. I’m really impressed with this car. The cabin space is huge, the car is fast, its pretty tight in the turns, but not as tight as my GTI. It also has got that feel of the road without the rib-cracking jarring that I get in my GTI. The layout of the interior I like quite a bit – lots of quirky stuff that would drive a normal person nuts, but to me is unique and fun. I like the layout of the dials and the center console. The only downside on the Saab is the lack of bluetooth. What is GM thinking? On-star blah blah, but really I can see a lot of people simply not buying GM cars for this fact alone.

Going back to Edmunds and looking at stats on the three cars; its hard to not put the Saab in the lead spot in everything except perhaps reliability and cost of ownership. It really comes down to the BMW and Saab. The bottom line for me is that the Saab is faster and has a serious edge in horsepower and torque. The Saab is also quite a bit cheaper when equipped similarly. I also find that I like the Saab’s design better – its sleeker and the interior, although not “rich and fancy” is more my style: practical, clean, and functional. 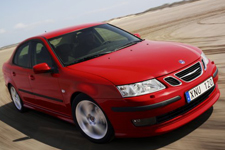 So the next step is to wait for the 2008s to become generally available and then wait for a deal from Saab/GM. Hopefully before too long I’ll be hearing the whine of that turbocharger spinning up and down and talking about being “born from Jets” and all that crap. I can’t wait 🙂