Ruby on Rails: Highway or Railway to Hell???

I can hear the sound now…AC/DC…something about a highway (railway) to hell. Yes its true I’m taking a look at Ruby on Rails, not entirely by choice, but you know what? Learning is good and there’s always something you learn when you learn even if its just what is not worth learning or worth learning. Kinda like watching CNN today and FOX tomorrow…I’m sure I just lost half my readers. Ok so the point is – yes I’m going to fiddle around with Ruby on Rails on macOS to see how it compares to other web frameworks I’m using today (Symfony 3, Node+Express+Sails, and Foundation) or have used in the past.

How We’re Going About Learning Ruby on Rails

Starting with an MBP running the latest macOS (OSX), we’ll start with a homebrew install and follow that up with a good dose of reading on several internet resources. I have access to lynda.com and then have a couple of decent courses on Ruby and Ruby on Rails fundamentals.

Installation with “brew install ruby” works straight off – no issues with that. I’ll be doing all my work with MySQL and I have the latest of that installed. If you have general questions about setting that and just about all other development tools on macOS check out my post here.

As I said I have a burning platform at work (aka a project I need to get done) so I’ll be learning on the fly with a few other folks in the team. Rails is pretty similar to Symfony 3 so luckily I do not think this is going to be a big deal to pick up. There’s also a set of fairly good training on Udacity and on Lynda that I’ll be running thru.

Tips and Tricks for macOS/OS-X

I’m a big fan of Jetbrains tools. They have a Ruby specific IDE called RubyMine. They also have a plugin for folks that license their IntelliJ Ultimate subscription product. You could use things like Sublime and Komodo as they also make a fine Ruby IDE, but I’ll stick with Jetbrains and the IntelliJ plugin. In the IDE there is style formatting and best practices tips, debugging and error detection, and you can run all the typical ruby command line things (like generator commands) right from the “New” option by right-clicking on the project. For example right click and select “run Rails Generator” and in the dialog type Migration and it will give you a helper. Enter a name like “MySillyMigration” and it will run that and create the migration in the right spot in your project.

You can also still do everything from the command line and IntelliJ will pick it up and synch correctly.

Tips on Configuring IntelliJ for Ruby on Rails Development 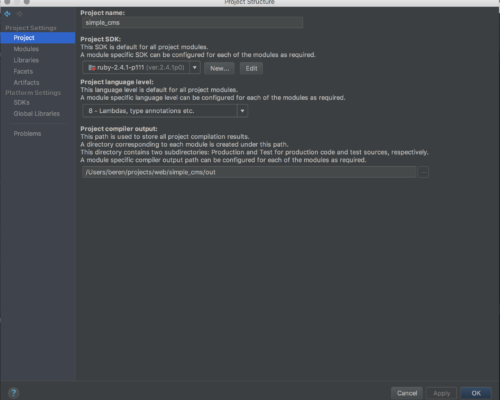 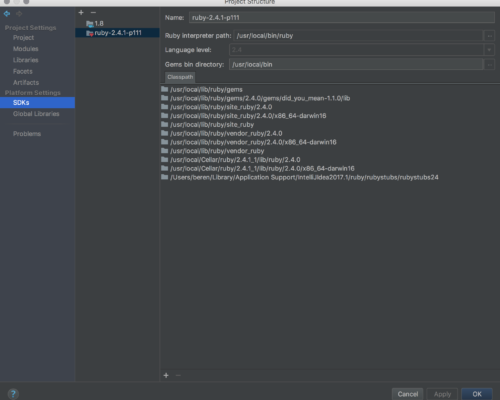 Tips and Tricks – More to Come…

I do not have a big list here, but you gotta start somewhere:

Impressions of Ruby on Rails

I’ve played with a ton of frameworks over the years. RoR is fairly similar to Symfony 3 – yeah don’t laugh. They have a lot of the same automation capabilities in terms of project creation, database manipulation, dependency managers, etc. As with Symfony which has been around for years, one of the nice RoR features is the community. If you can’t figure it out, most likely someone else has. However as with Symfony you need to be careful to when reading up that the solution works on the version you are using.

I can certainly say that I’ve found it fun to work with and learn. I’m not sure how much I’ll end up doing with Ruby on Rails, but if I do I’ll keep adding up tips and tricks that I learn here.