What guy wouldn’t jump and run to the store when their wife asks if it would be ok to have home theatre seating in their living room? Cupholders, black leather, reclining seats, and no pillows! Well I guess I’m one of those guys 🙂 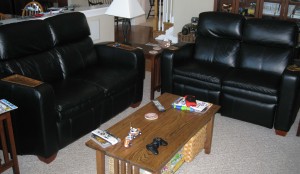 heck this is going to be football heaven. The product is the La-Z-Boy Matinee Home Theater seating.  So we ordered the stuff and 2 months later it arrived. Fantastic! The pieces arrived in good shape and right when they said they would arrive. Pretty nice; a great buying experience.

Things were great for a couple of weeks but then I started to notice problems. The wedge pieces have armrests – makes sense – so that when you recline there is somewhere to put your elbow. What I noticed was that the place where you put your elbow was starting to push in. Fearing some kind of defect I immediately called La-Z-Boy and demanded a replacement. They agreed and ordered replacement units:  no charge and no question!

Of course it would take another 4-6 weeks to get the units. So we waited…sure enough the stuff arrived and a technician replaced them. One curious thing was that the guy had to rip the cup trays out (with a screwdriver) and glue them into the new units 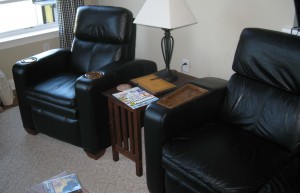 himself. The guy luckily had a tube of epoxy glue in the van, but he had no way to clamp the trays in. I had to pile paint cans and dumb-bells up on them to hold them down tight while the glue dried overnight. Well – problem resolved I hoped.

La-Z-Boy wanted to leave the old pieces here for me to throw away – strange but ok.. I wanted to see why this problem happened anyway – was it bad assembly or something worse. Was it a defect in my pieces or was it a design defect?

I did a little dissecting project and what I found was really amazing. The area in question is the wedge piece armrest. See the pic below for the exact location. 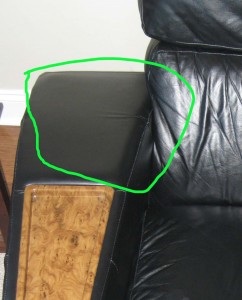 In my basement I flipped the unit upside down and cut through the felt on the bottom. Straight off I was a bit shocked. The piece is plywood and some bracing. The flat back of the unit is made out of shirt cardboard. I could not see the top because there was a plywood brace across the top. Naturally I was thinking that the plywood was the actual top, but I could not see any signs of damage or movement. Then I decided to cut through the leather on top. What I found just amazed me: the top of the piece is also made out of shirt cardboard – right where your elbow goes. So you have the leather, a thin piece of foam, and then crappy thin cardboard. There is nothing but air supporting that cardboard.

Cheap cardboard and there is a gap under it. That’s why it pushes in.

That’s just amazing to see I think. One of these pieces is about $1200 USD, so by no means is this a low-end piece of furniture. You can see in this pic that the cardboard comes up the back side and wraps across the place where your arm would rest. Any pressure at all and this will start to sag in – a no brainer conclusion to draw. This is a serious design flaw. It is so bad that it cannot have been made by accident. Any slight testing in the shop would show that this is not going to work. Given La-Z-Boy’s “expertise” in recliner systems this can only be a cost vs. quality gamble that people will not notice until warranties run out.

UPDATE (07-Sep-2010): I’ve since learned that it is not just the wedge pieces, but all the armrest pieces that are made out of shirt cardboard. You start seeing the problems first in the larger wedges, but the problem starts to show up in the standard arms too.

I’ve gone back and google’d the web and not found too many people mentioning this problem so either I’m the only idiot to buy this junk or other people have not had the furniture long enough to develop the problem. I thought I would at least write this post to give a shout out to people considering this furniture. If you are considering this furniture just go into the store, recline, and lean on your elbow and you will feel the cave in starting.

UPDATE (10-Jan-2012): Still have the junk in  my house…my little 17 pound terrier Pippin is even too much for the arms on these things…sigh…worst buy in my life.

UPDATE (13-Oct-2016): Finally we are getting rid of this crap. We’ve ordered a Stickley sectional sofa to replace this junk. All the arms are crushed in and many of the seams are starting to open up. I’ll stick to my opinion that La-Z-Boy is the worst furniture on the market.