In my previous posts I’ve looked at getting started and then at the basics of UI, events, and some side notes on the practical side of working with Android devices:

In this post I’ll bite the bullet and pull out my Macbook and see how all of this works with it. I suppose I can get out a Fedora machine, but one things at a time. I would also like to work thru some graphics and some more advanced concepts with UI, components, and events.

First thing to do is go get a whole bunch of things: 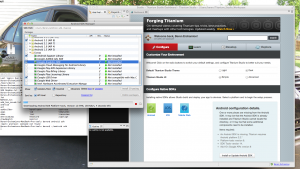 Well that’s a whole bunch of stuff – go grab 4 beers and watch the Tour de France as it enters the Pyrenees (15-Jul-2012).  It will take a while. With all that done its time to build a sample app to a simple device – I have a Samsung Nexus S and an iPhone A1332 (but I need a SIM card this one – will have to scramble around for that).

After the downloads (and watching the amazing number of flats in the tour – tacks in the road!)  I built a test app and got it deploying from Eclipse to the 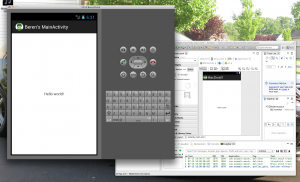 emulator and to my physical phone. Pretty easy (kinda) or I should say as easy as it is on Winbloze. Was pretty darn slow on the Mac getting the emulator going, but it did work. It also seemed to work ok deploying to my android phone from the Mac. I guess some of the emulators ain’t zippy fast on the PC either.

Since I’ll be building a bunch of apps, I’ll first need to stat working on graphics sets – a good place to start is a set of splash screens and app icons. If you look in your android project, graphics and other media resources go in  – resources. Yes, not too difficult. Titanium puts in sample screens for you. I simply grabbed the structure out and used Photoshop to make a 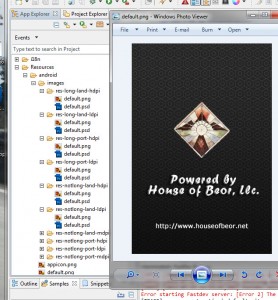 representative set for me – then save these out as a zip file and you will be go to go for all your apps. I created the following sizes and pixel densities:

Later on in the dev cycle I would clean out those PSD files – and I’m sure there is some genius that could figure out how to generate all the graphics from a single PSD source file, but not me 🙂 This is another spot where iOS is different – you have to manage all these things via iTunes. I’ll have to mess around with that later. I did have some sporadic problems with the icon not showing up properly – not sure yet what’s causing that (UPDATE: To solve the icon thing just delete the app from the device and you are good to go).

So far I’ve only played around with a few simple UI components. Table Views are a more sophisticated component that you see used in a lot of apps and even in most of the configuration screens for phones and tablets. This juncture requires a re-visit of the layout options – they are crude, but keep in mind the screens are small and simple, check these pages:

The TableView component has a ton of features – there’s a sample app in the docs, but like all of the samples it does not use the application structure pumped out by the Eclipse templates. I started messing around with this, but really this is where ATS has some issues:

To build my TableView example, create a new single window application using the Eclipse wizard. I added a couple of labels in FirstView.js (this is the file that is referenced from the main app.js file once you work thru the various startup tests) to be sure things are working properly:

Make sure that launches to either an emulator or a device. Now we know where to add our crap – um I mean components:

Some labels to the row:

and finally add all of this to the UI:

You should be good to go – try launching that (here’s a copy of my FirstView). If you get errors carefully look for null pointers and such in the console output. You should get something that looks like this –>

One thing that is really helping me to learn this tool is – don’t just use the examples. Download them and look at them, but make new programs from eclipse and either cut/paste from the download or just type them for yourself.

I re-worked the TableView example using the ATS generated tabbed window structure. Seemed to work ok – basically if you just enter all your logic into either a seprate JS file or into the ApplicationWindow.js file – this seems to work, but hold on! Look what I found:

Looks like a good start at a reference, but then it kinda stops and there’s been no activity since. Too bad. I did find more explanation about this project here deep in the documentation:

Then I found this as well:

Well I hope this series of articles is helping you to learn this tool. At the least for me its a good aggregation of links to things that are helpful. I’ll be working on a few more things in my next post – other more advanced components, trying to figure out better architectures (or at least how to chop up code into reusable pieces), and finally a comparison of development between ADK and ATS.