Ah – yes once again its time for by bi-annual review of linux distro’s. Why? I don’t know – but why not? Last time I looked at Fedora 16, Mint, and a few other distros. F-16 got pretty beat up by most people about its dekstop GUI (I kinda liked it) and I’ve never tried out Slackware. So let’s see what’s up with these two distros. Like last time I’ll be using my trusty Lenovo T60P ThinkPad.

Getting the Slackware distribution was a bit more difficult. ISO files are not directly available. You can get files from mirrors or use a torrent to get the ISO. I chose the latter (I used uTorrent). Slackware is pretty big – 4.2 GB so the download on my crappy Verizon DSL connection took quite a while.

Ok – um…wow – boot up the DVD and you are dumped to a command line and told to partition your drive using fdisk. What? Serious? Hmmm…old school. I searched around and found some slightly helpful things – but you would think there would be some kind of recommended setup at least on the slackware site. Yikes.

Well anyway I used the cfdisk program option to partition my drive into three chunks: 1 GB swap space (probably too small – should have done 2GB), a 25GB space for /, and the rest for /usr. Probably not the best setup on earth, but it should do the trick. Following that I ran setup and picked the options to install everything and off it went. After copying a bunch of stuff there’s a blithering array of questions you need to deal including such things as pick out a mouse, service startup, picking loaders, and all sorts of things.

I rebooted the machine and after a bizillion lines of text scrolling past was dumped out to a command prompt. Ok – you startup KDE with “startx” or “startkde” – that booted up the GUI desktop. Decent desktop. Next – get a wireless network running..um…problem here. I can’t figure out how to get a wireless network running. I searched around on the internet, found some references on the slackware docs to this “new technology”, found a bunch of forums posts, and came to the conclusion that maybe this distro ain’t for me.

Back in the day I would have sat down and dug in on how to manually configure all this with inconfig and all that, but these days its just not worth it unless you are into it. For me its gonna be a 30-sec hold on the power button and Fedora 17 here we come.

I grabbed the ISO CD  – its nice that you can still get something on a CD – about 650MB. Booted that up – there no option to install right away so you have to do the CD boot thing. The desktop appears shortly and you can then either play around or install. I’m installing. ..the install steps thru all the normal config options, it creates the partitions for you (yes you can create custom ones), and goes to completion. Couldn’t be easier.

After a reboot the system came up with a few basic config screens and voila. the interface looks pretty much the same as 16 – which is ok for me. After the reboot there’s a quick check on WiFi – yep just bang in a key and good to go. 30 minutes later I’ve got all the udpates applied and the system is running nice! 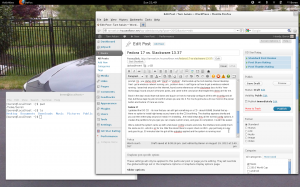 Fedora 17 is smooth and snappy on my 5 year old T60p ThinkPad. The graphics look good and the basic programs are here – including one of favorites RhythmBox.

All the hardware on my machien is working – sounds, grpahics, CD/DVD. Flawless and simple.

Most of what’s new in Fedora 17 is fun an candy for programmers:

From there we hit some bumps. As always it seems that the Fedora guys just quite cannot make installing software easy. Take any of the aforementioned products. can they be installed from the Add/Remove Software program – no. Try it. You can’t. Search on “jBoss Application Server” or “JBoss AS” or anything else. You won’t find it. Same for apache httpd. WTF? Come on. For jBoss the trick is just search on “jboss”. it will be about 20 down the list.

Installation of programs using Add/Remove programs thing is Fedora’s achilles heel. Boy it sucks – even when you find what you want to install and run the installation – where does it go?: I installed jboss – but no clue where it went. Dumb. Between that and the lack of a service control panel to start and stop services – grrr!

Well – slackware reminds me of OS/2 – unless you were totally into it, you hated it. Sorry to fans of that distro – I’m sure some will take offence. Fedora continues to shine if you forget about the add/remove software stuff – use yum or just grab stuff on your own. You can get the latest software running on a pretty old laptop and the laptop will seem like new in terms of speed. Plus it is stable, runs all the internet stuff you could need, and has some decent multimedia stuff that you can’t get on Windows. Go Fedora 17!