Drupal 6 – Bringing CMS to the Masses

I’ve installed and configured Drupal 6 RC2. I have to say that this is a nice improvement. Across the board there are fine touches starting to appear in the product that are putting it very close to Plone 3 in terms of easy administration and configuration. That may sound like a bank-handed compliment, but if you read my blog regularly you will know it is not.

Although my first upgrade of an existing 5.3 site ended in failure, I’m chalking that up to “user error”. Instead of wallowing in self-loathing, I decided to just do a clean install with 6 and check out the functionality. You can read for yourself the new stuff in version 6, what I’ll do here is simply talk about the things I like.

The administration site has been tweaked and tuned in subtle, but very nice ways. In many places there are now very nice uses of AJAX technologies to allow for easier ordering and placement of blocks and menu items and such. It ishard to put a finger on exactly what the changes are, but to me it just feels “slicker”. Here’s an example: 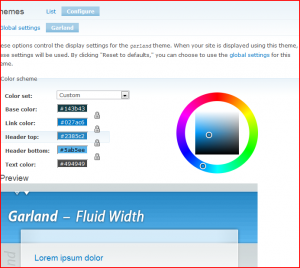 There are still some things that you cannot configure within the system, but this is now mostly at the module level. For example FCK is not packaged with the core so you have to grab this and muck around a bit to get it working. I can’t imagine why its not package – or have some rich text editor packaged in the tool, but installing it isn’t that hard. There are a bunch of things to do, but unlike with 5.3 I did get everything working without needing to grab the IMCE (which is good since there isn’t a 6.0 release of that yet).

The Feed Aggregator module and the management of feeds have been reworked quite a bit – er well it actually works now on my system (5.3 required some DB tricks to work at all) – it is quite easy to add feeds and have them appearing right away with content. Here’s a shot: 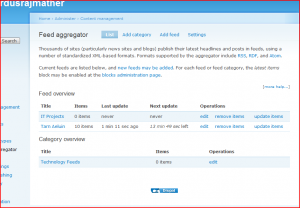 Once you get your feeds working you can have a nice view as a page plus little gadgets on your sidebars. Click on the thumbs below to check it out:

Two of the most used components have been reworked quite a bit for Drupal 6. The Forums modules and the Book module have a lot incremental improvements that add up to a much better user experience. In the Book module there are now nice AJAX controls for re-ordering your book index – this is really nice. The navigation is quite nice with the books. Frankly we are using these to eliminate alot of the chaos induced by part-time wiki-ers within sites that I work with. Books are easier to manage, easier to search, and the navigation is really nice.

Here’s a shot of a book I whipped up. Note the navigation at the top and bottom: 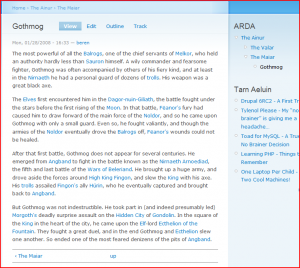 With the Forums what you get now is a set of forums that are more like the forums we all use. I guess they have lost their “drupal-ness”. Threading works right and you get “normal” looking forums: 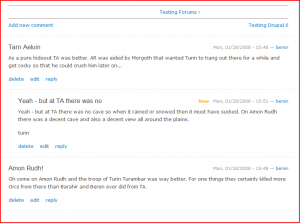 You can also now include a poll within a forum..but I can’t seem to figure out exactly how to do this…d’oh!

Themes – Do the Troopers Work?

Eh well – nothing’s perfect. There is work to do with themes. I tried to install my theme, but it didn’t work right. Well themes are changed alot of Drupal 6 so I’ll be posting an article on converting my Druapl 5.3 Troopers theme up to 6. Here’s a shot of my latest theme look: 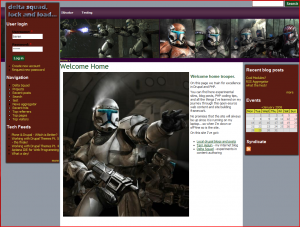 I’m also working on another theme on Saab’s Turbo-X car.

I found a few other minor issues:

This is a big upgrade for Drupal – the tool is really starting to show maturity and depth. Congratulations to the Drupal team on their hard work. I’m going to keep on testing and using Drupal. Highly recommended to go for it.