CES Day 3 will be the last day for me. I’ve had to move up my flight home so that I can go on another business trip on Monday. My feet are sore, but I’m ready to hit the pavement and get over to the Sands Expo and Convention Center to check out the latest in Digital Health/Wellness solutions, Home Automation, and IoT technologies.

Holy smokes! I remember when I got my first Fitbit almost 4 years ago. What an explosion of “me too” devices. There must have been 30 companies pushing their devices which all basically do the same thing. Of course every brand touts their device as “the most accurate” and many of course are stressing the accuracy of the HR function, taking a shot at Fitbit’s recent issues with this. I did not see Garmin or Jawbone at the event.

Of all the products there were 3 standouts. Withings was a stand out because they have a very 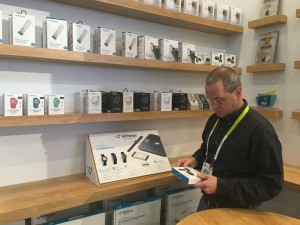 broad range of devices that all work together. Each device is probably in the middle ground on functionality, but all of them together is quiet a strong play.

I did checkout the Fossil-Misfit booths, but they didn’t seem to have anything new yet. There were a couple of Fossil watches with electronic guts, but nothing terribly cool.

Lifetrak (never heard of them before) had some interesting products. They claim to have a highly accurate HR and HRV band, having

a background similar to Polar. The Lifetrak R450 looked pretty cool – with all the tracking you would expect plus functions that monitor light and advise when its time to get a bit of sunshine. In addition it also tracks sleep and of course has their HR/HRV functions. It also has a year battery life, similar to the Garmin Vivofit.

Tomtom had some interesting bands that have HR, GPS, and music streaming. They claimed 6-8 hour battery life with everything on. That’s pretty good if true. The guts are made by LifeQ – some guys I met the night before and will talk more with.

Lastly is Fitbit. They’ve been in the news lately for problems with their HR accuracy and also for a lackluster new watch. I do wear the Surge HR device in question and I’ve compared it to my Polar and my other HR tracking sensors built into my training equipment. I’ve not noticed a 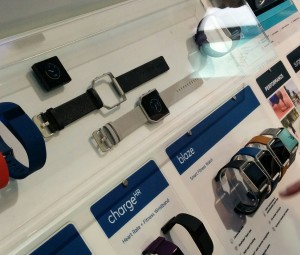 big difference in the numbers, but I guess this post is about new stuff. Fitbit had the new Blaze device in the booth. Despite all the internet buzz about how the device sucks, I liked it. I liked the look, the interchangeable bands, and the simplicity. I’m not sure what all the fuss is about.

Home automation and internet of things technologies were pretty big. Carrier, Lowes, Bosch, iDevices, Honeywell, and ADT, are the big names, but there were a ton of smaller players. I was most impressed with Lowe’s Iris system, although some idiot ruined the demo I was watching by pulling the emergency r 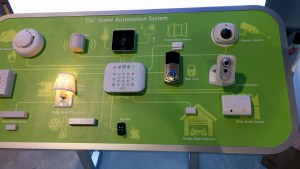 elease cord on the garage door. The carrier solution looked pretty comprehensive and can be installed by a regular person. They had some interesting kinds of sensors for flood detection and other things:

Another interesting gadget was from Savant – a really slick programmable 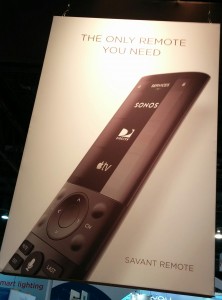 remote control. I really want to replace the remote that I have since I cannot program it myself and it is also kinda slow. This device looked pretty cool and can get operated by buttons or by voice.

Finally the day’s winner: Picobrew. What is it? It is a self-contained beer brewing machine. Its amazing! It brews with real ingredients (no syrups or shortcuts), goes straight from wort into the keg with yeast as a sealed system. It is incredible. They have a few units that make different amounts, but the larger unit can 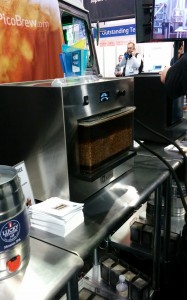 put beer straight into corny kegs. I had some samples (of course!) and the beer was quite good, if a bit hazy. They had the machine actually making beer at the show. You can see it here to the left – those black hoses are running down to a keg on the floor! Incredible!

43 miles of walking and what am I left with? It is definitely an interesting and somewhat overwhelming show. Will I do it again? I’m not sure – so much of the content is streamed online that I’m not sure it really pays off to go to the show every year. If we have another big demo or product release of our own I would of course go. If I do go in 2017 I think I will spend more time up front planning what I want to see. I did miss somethings – like the Corning glass booth and almost all the automotive stuff (because) I had to leave early). I probably should have tried harder to get to some of the special events as well.

What’s the coolest thing I saw? The Casio Lampfree projector was very cool. I liked the Fitblaze and the Tomtom device I mentioned. Carrier’s Cor automation system looked very interesting. However I have to give it to the Picobrew!

It is definitely an experience and having the event in Las Vegas means that you can always skip out and have some fun. Staying at the Paris Casino was also an excellent call because it is on a Monorail stop and it is in the middle of the locations (LVCC, Venetian, Aria, and Cosmopolitan). It was also possible to walk everywhere except to the LVCC – you can get to the Sands Expo from the Venetian.

I decided to break up the posts for each day because the page was getting pretty big and heavy.