After several weeks of trying I finally had to give in to my sweaty and now pruney hands. I could not get the heat out of my Ubuntu install on my T60p laptop. I tried everything…CPU monitors, tuning down the speed, blowing out the vents, BIOS changes, and all that. Last night I grabbed the Fedora 10 installer, burned an ISO and re-booted. I completed my install this morning and although these two distros have a lot in common, they also have some definite differences in how they work.

Installing Fedora was quite easy. I simply went to their website and downloaded the ISO for their bootable OS. It is 638MB so it takes a while get grab. After a couple of beers (a DAB lager and a Flying Fish HopFish IPA) I was ready to burn a DVD, reboot and up came a complete Fedora distro running on my laptop. After a quick check to make sure I could get a WiFI connection, that my graphics card was working, and that my CD/DVD burner was working, I clicked on the desktop icon to initiate a full install.

The installer starts up and is easy to use, just answer the questions and off it will go. I did choose the option to remove all partitions and start over from scratch. The install took about 10 minutes to complete and after a reboot I was good to go. I have Fedora 8 on a workstation so I’m pretty familiar with this distro and all seems familiar. The interface is snappy and performance looks pretty decent.

It was a bit of a chore getting Open Office installed..its nearly impossible to find the right crap in the software managers on Fedora. Instead I downloaded it from the openoffice.org and installed it myself. That was ok – but if you try this, you must run the GUI installer as root. Compared to Ubuntu this is a pain. On Ubuntu there was a nice and easy install process with their add/remove programs widget. Installing other things on Fedora was easier or unnecessary – for example the ATI graphics drivers. On Ubuntu I had to install extra “proprietary” drivers; on Fedora everything seems good to go.

I enabled the full 3D effects and desktop effects at the highest resolution I can seem to get (1680×1050) with my card. Fedora seems to be running nicely with minimal heat and fan noise. Igrabbed a much nicer sensor monitoring system that I had before. If you want to monitor your sensors on linux this is the best package:

Hands down – super cool (lol – no pun intended) – this package can monitor everything from CPU speed, to fans, toPCI cards. Its very easy to install and very easy to configure. You can see in the screen shot that I’m monitoring CPU temp, hard drive temp,GPU temp, the main fan speed, and the CPU speed. 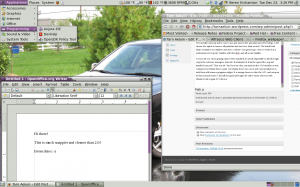 Running the machine now while connected to my WiFi network it is quite a bit cooler than my Ubuntu machine and there is much less fan noise. I can’t explain why, but it is definitely different. I’m thinking it has something to do with graphics card drivers. Even with the full desktop effects running (the bouncing and bendy windows) things are running cool at about 82F for the CPU and 135F for the GPU.

I’ve been using more of the laptop features like suspend/resume and most things operate very much the same, however the WiFi re-connection after suspend is much more reliable on Fedora. Most of the time this works, but on Ubuntu it didn’t resume properly most of the time – forcing a restart.

I’ve talked about a lot of pros for Fedora. What Ubuntu has going for it is that it is a bit simpler to get installed and working for a basic setup on common hardware and getting common software packages installed is much easier. If you know what you are doing (aka you are a geek seeking fun and entertainment), Fedora is more efficient, can be hacked around with a bit more, and in my opinion is a better distro, but not by very much.

Above all – you can’t really go wrong with either one of these fine software systems. They are easily better than MS Vista…I can’t comment on what Apple and BSD has to offer yet. Now I’m onto getting Eclipse 3.4, Seam, MySQL, and JBoss AS/Portal installed on my shiny new Fedora laptop. That should provide hours of geeky fun”.